The Robert & Adele Schiff Family Foundation, which gave The John Updike Society the money to initially purchase the house at 117 Philadelphia Ave. in Shillington where the writer said his “artistic eggs were hatched,” has extended its support. The foundation’s donation of $170,000 will enable the society to purchase additional land for parking and to finish the task of turning the house into a museum.

“We appreciate the fine work you do, and we are proud to support your organization,” the donation letter said.

The grape arbor that was attached to the side of the house when Updike lived there has already been restored, and a privet hedge that once fenced the property will be recreated in the spring once the ground thaws. During the spring and summer, exhibits will be constructed so that people who visit the house not only get an accurate impression of where and how young John Updike and his family lived, but through those exhibits begin to understand how much Berks County meant to his work and why Updike remains one of America’s most important 20th-century writers.

Besides supporting work at The John Updike Childhood Home, the Robert & Adele Schiff Family Foundation donation provides funding for travel grants to attend the 6th Biennial John Updike Society Conference hosted by Alvernia University from Sept. 30-Oct. 4. A Call for Papers is still open, and all those interested in Updike are encouraged to attend, whether you’re presenting or not. The John Updike Childhood Home, which was approved last year for a Pennsylvania Historical Marker and inclusion on the National Register of Historic Places, will be dedicated on Saturday, Oct. 3, as part of the conference activities. Writer Lorrie Moore will deliver the keynote address that evening.

A John and Gaye Patton Charitable Foundation 2019 Grant of $2000 has been awarded to The John Updike Society in support of the society’s efforts to restore The John Updike Childhood Home and turn it into a museum.

“We are pleased to continue our support of the Updike Society because John Updike was and continues to be such an inspiration to us, and his works represent a significant physical presence in our literary collections,” wrote John M. Patton, M.D.

The Pattons said that they hope to be able to attend the 2020 Updike conference in Shillington to visit with society members and see the progress of the house at 117 Philadelphia Ave.  The John and Gaye Patton Charitable Foundation is based in Santa Rosa Beach, Fl.

“We selected 100 organizations across the country in support of causes important to those who matter most to us—our customers,” the American Family Insurance Dreams Foundation website stated.

The John Updike Society today received notice that The John Updike Childhood Home was formally approved for inclusion on the National Register of Historic Places. The other Pennsylvania property approved this round on April 22, 2019 was Oaks Cloister in Philadelphia.

The Pennsylvania Historical and Museum Commission announced yesterday afternoon that The John Updike Childhood Home was one of 18 new historical markers approved out of 55 nominees. The other high-profile approval was musician Jim Croce’s home.

John Updike, who lived in the house at 117 Philadelphia Avenue until he was 13 (1932-45),  received the 1983 Distinguished Pennsylvania Artist Award from the governor in a Harrisburg ceremony. Updike wrote often about the house, Shillington, Reading, and the surrounding area, and was honored by presidents George H.W. and George W. Bush in White House ceremonies.

This article from the NBC Philadelphia affiliate gets the county wrong—Shillington is in Berks, not Bucks County—but it’s a fact that soon there will be a state-approved marker placed outside The John Updike Childhood Home. The property is owned by The John Updike Society and will be operated as a museum and literary landmark. A grand opening for the house-museum is scheduled for October 3, 2020. While the restoration is complete, what remains is to decide on which items would make for informative and satisfying displays, and to mouth those permanent exhibits.

The society’s application for inclusion on the National Historic Register is separate, and is now with the National Park Service, who will make their determination sometime between now and the beginning of May.

WITF, the PBS affiliate television station in Harrisburg, Pa., recently produced a five-and-a-half minute film on “John Updike’s Shillington” for a national series titled “Great American Read.” These clips will be shown across the country, as we understand it.

And the film on Updike and Shillington prominently features the house, with John Updike Society members Richard Androne, Peter Bailey, and David Silcox appearing on camera to talk about Updike and the community that meant so much to him. The film was shot in and around the house with the help of Dave Ruoff, who was on hand to open the building and direct traffic. 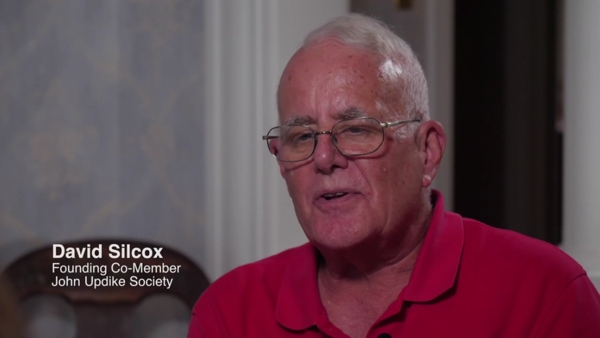 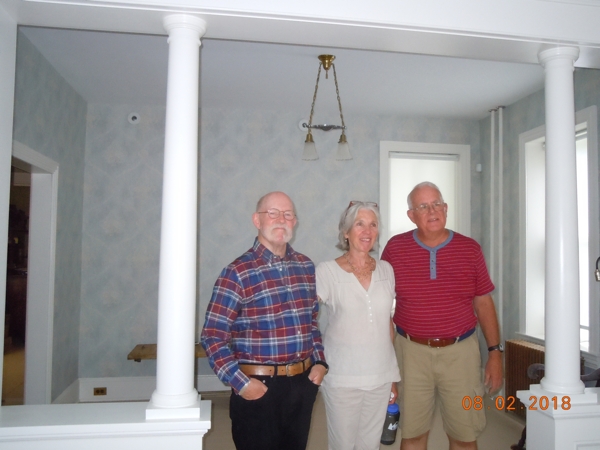 On August 2, 2018, Elizabeth Updike Cobblah and her husband, Tete, got to see the restored John Updike Childhood Home for the first time (“The place looks great!”) and also brought another batch of unique, one-of-a-kind donations for display in the house-museum that’s taking shape.

Elizabeth donated her father’s “scratchy wool jacket from childhod,” along with an antique wind-up pendulum clock that came out of the Plowville farmhouse and most likely the Shillington house as well, given the age. She and Tete also brought the footboard and side rails of the moon and star bed, which came out of the Plowville house and again, probably the Shillington house, and Linda and her young son painted the headboard together. Elizabeth also loaned the house museum a precious family heirloom: an 1850 woolen coverlet, woven for Linda Hoyer Updike’s grandmother, Mary Fry, by John Kachel of Robeson Township, Berks County, an example of local folk art.

Elizabeth and Tete also brought objects donated by the siblings. Miranda Updike donated a blueberry ceramic well-used coffee pot from the Plowville farmhouse, which also was probably used in the Shillington house. Michael Updike donated a matching blueberry ceramic cup from the Plowville house, along with objects that came from John Updike’s office: a wooden darning egg, a boy/girl rubber stamp, a ceramic decorative rabbit, and a blue swivel office task chair.

Michael also donated a set of cobalt salt and pepper shakers that came from the Plowville house, and possibly the Shillington house as well, along with a reading lamp stand of Wesley Updike’s that may also have been used by John Hoyer from Plowville (and possibly Shillington), a U.S. flag that had been draped on Wesley Russel Updike’s casket (RIP 1972), two John Updike “business cards” from high school, a Trust Me promotional stand-up, and Linda Updike’s fountain pen–one she used “for everything from lists to checks to letters.”

At the house to receive them were John Updike Society board member Peter Bailey and his wife, Fran, and Dave Silcox, who has been helping the society to acquire items for the house-museum and in whose dining room Jim Plath, Jim Schiff, and Jack De Bellis met to plan the society’s launch at the May 2009 American Literature Association conference in Boston, Mass.

Only a few large objects are currently on display in the house. Other items will be added as exhibits are created. 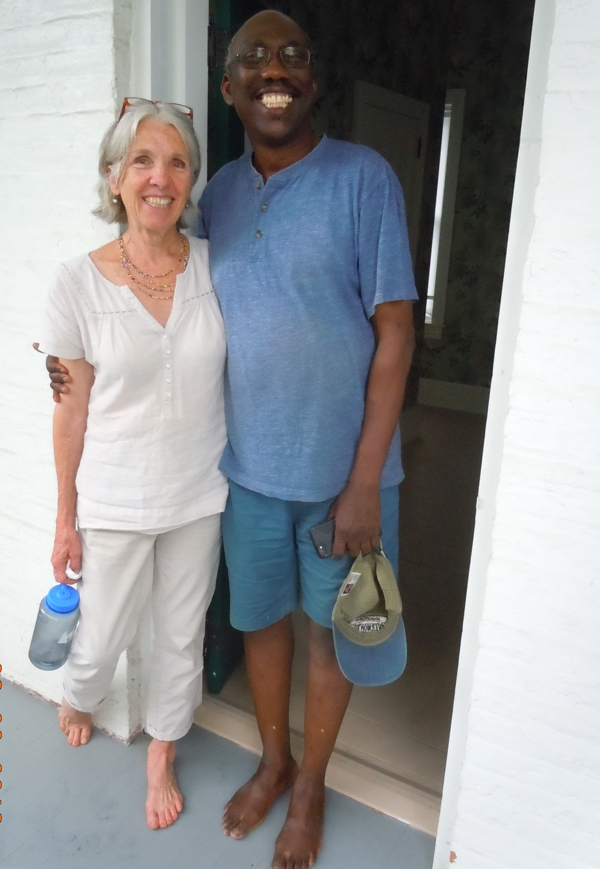 Reading Eagle supports museum delay to ‘get it right’

In today’s Reading Eagle, the editorial board weighed in on the The John Updike Society’s recent announcement that the grand opening of The John Updike Childhood Home would be delayed until October 2020, when it was decided that it would coincide with the Sixth Biennial JUS Conference hosted by Alvernia University.

“The long delay just makes sense, given the nature of the largely volunteer effort and the need to raise more funds and collect additional materials. A site that’s expected to attract global interest should aim to be world class” (from “Editorial: Museum at Updike home should be worth the wait”).

The society appreciates the Eagle‘s support and the support of neighbors and area residents. “Getting it right” has been the society’s mantra from the very beginning. John Updike deserves no less, and neither do the people of Shillington and Berks County.

Pictured is a folk-art headboard and chairs that were painted by Linda Updike and her then-young son while they were living in the house at 117 Philadelphia Ave. Young Updike used to lie in that bed when he was home from school sick, and there he would watch his aspiring-writer mother work at her typewriter in the front guest bedroom. 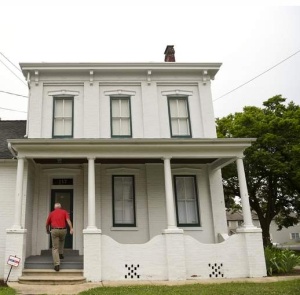 Previously, the hope was that the grand opening could take place sometime in 2019, but the restoration is still incomplete and society president James Plath said that rather than simply buying display cases and stuffing them with exhibit items, “We want to do things right. We want this to be a world-class museum, something that the residents of Shillington can be proud of.” He said that they need to find a curator to design and install exhibits, working with the knowledge of Updike scholars to identify highly displayable items already in the society’s possession.

But as Riley Murdock reported, the society is still looking for a turn-of-the-century or late 1800s slate kitchen sink to install, and a Tiffany-style one-bulb chandelier for the dining room. R.J. Doerr, who has been working on the restoration, still has the side porch to finish and grape arbor to construct. Then the society plans on tearing out concrete walkways and replacing them with brick, as it was during Updike’s time in the house. Additional parking spaces also need to be created before the grand opening, and for the finishing touch a new hedgerow of privet needs to be planted on the perimeter of the property.

Plath said that he has several possible curators and exhibit designers in mind, and that the transformation from house to museum will continue once the society hires someone to consult and/or design the flow of exhibits.

In the meantime, tours of the house are still available upon request by contacting John Updike Childhood Home director Susan Guay (susan.guay@alvernia.edu) or walking up to the single-story annex of the house and asking for Dave Ruoff.

Here is the full Reading Eagle article. The photo is by Lauren A. Little.

In an unsigned article published in the Monday, April 23 2018 Reading Eagle, it was announced that the Shillington Borough Council “on Thursday voted unanimously ‘to name a portion of the unnamed tributary to the Angelica Creek, which runs along Gov. Mifflin School District property, in commemoration of novelist John Updike’.”

School officials described the section in greater detail:  “The stream originates within Cumru and winds through Shillington Park, then adjacent to Mifflin Park Elementary and Governor Mifflin Intermediate Schools to eventually join with Angelica Creek in the Ken-Grill area.”

Jeanne E. Johnston, assistant secretary of Cumru Township, said that the name “Rabbit Run” was suggested last September by Cumru Township’s board of commissioners to commemorate the second and perhaps best-known novel written by John Updike, “whose childhood home was in the borough,” and that “the Kenhorst Borough Council already has agreed to support the comprehensive naming. The Berks County Planning Commission is also onboard. Thomas C. McKeon, vice-chairman of the BCPC, wrote a letter of support to the U.S. Board on Geographic Names (BGN) stating that “The Commission notes that the naming is a great way to honor author John Updike, who was a resident of Berks County. In addition, the stream naming will aid local emergency services in identifying places around the area.”

Since the BGN has already notified Johnston of “its willingness to name the entire stream, including those portions in Kenhorst,” it is expected that the final decision “likely will be rendered this summer,” according to Johnston. Here is the online version of the story; below is a scan of the article that appeared in the newspaper.