The John Updike Childhood Home recently acquired a sideboard that was owned by Clint Shilling (b. 12 January 1885, d. 10 September 1979) , a local artist who lived at 110 Philadelphia Ave., directly across the street from the Updikes, and who gave young John his first art lessons.  It will be displayed in the dining room against the wall where the Updikes’ less detailed sideboard once stood. 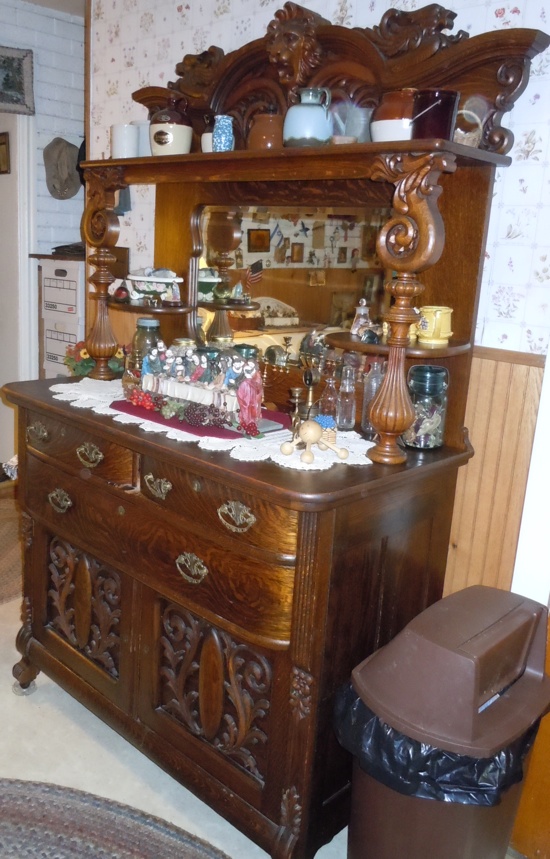 The piece came from neighbor Dorothy Huber, a friend of Clint Shilling’s. The grandson of Shillington founder Samuel Shilling, Clint was internationally known as a scenic painter for theater and ballet productions, with restoration another area of specialization—a skill he practiced for many years as artistic director of the Reading Public Museum.

In 1938, when John Updike was five years old, his mother, Linda Updike, arranged art lessons with Shilling. The precocious young Updike would have appreciated the lion’s head carved sideboard that was much more ornate than his own family’s—especially since, according to childhood friend Harlan Boyer, a favorite pastime of the two boys was lining up dominoes on the Updike sideboard and then knocking them down. It is not known how long Updike took art lessons from Shilling, but he was important enough for Updike to mention him by name in his long poem, “Midpoint”:

“Clint Shilling’s drawing lessons: in
the sun he posed an egg on paper, and
said a rainbow ran along the shadow’s rim-

the rainbow at the edge of the shadow of the egg.
My kindergarten eyes were sorely strained
to see it there. My still-soft head

began to ache, but docilely I feigned
the purple ghosts of green in clumsy wax:
thus was I early trained

and wonder, now, if Clint were orthodox.
He lived above a spikestone-studded wall
and honed his mustache like a tiny ax

and walked a brace of collies down our alley
in Pennsylvania dusk
beside his melodic wife, white-haired and tall.”
-“Midpoint” (1968)

The John Updike Society is grateful to Dorothy Huber for enabling us add a piece of furniture that has connections to Updike and the neighborhood. The acquisition of the Shilling sideboard is in keeping with our mission:  The John Updike Society is dedicated to awakening and sustaining reader interest in the literature and life of John Updike, promoting literature written by Updike, fostering and encouraging critical responses to Updike’s literary works, and, through The John Updike Childhood Home, preserving the history and telling the story of John Updike’s relationship with Shillington, Pa. and the influence that Berks County had on his literary works.

For a non-inclusive list of items the society is hoping to acquire, see our page on how to donate.

Film critic since 2000 and member of the Online Film Critics Society since 2005 whose reviews are linked to the Internet Movie Database (Imdb.com) and Rotten Tomatoes (Approved Tomatometer Critic).
View all posts by James Plath, Family Home Theater →
This entry was posted in Acquisitions. Bookmark the permalink.